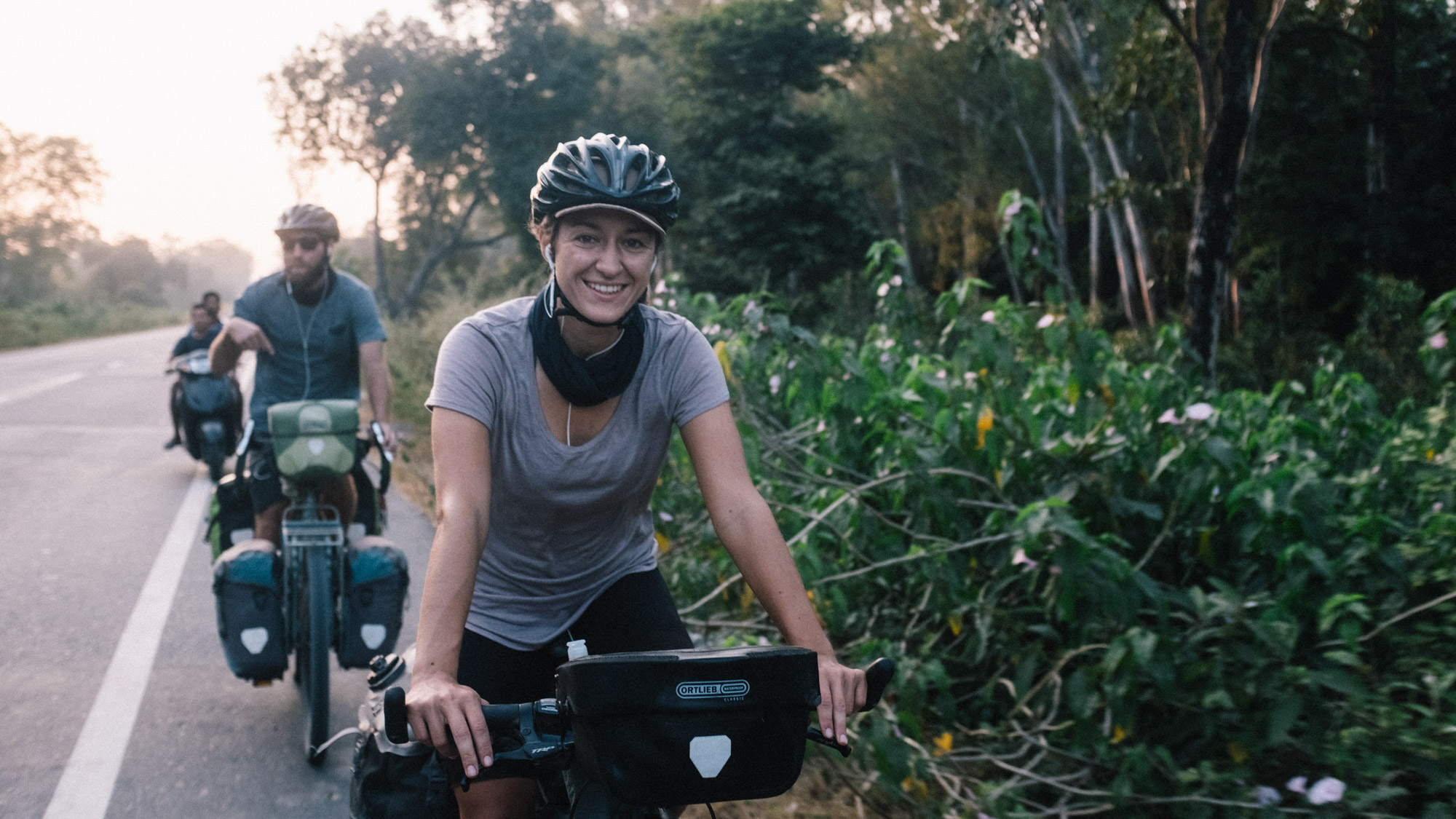 India is not the first country that comes to mind on a bicycle tour around the world. But we were drawn to the culture, the cuisine and the warm climate. We were looking forward to all the chaos, which somehow always seems to work out exactly how it was supposed to. We’re just not sure if our ears were ready for all that honking.

There are two logical options to continue travel overland after the Pamir Highway. Either one involves a difficult Chinese visa application, and then either East trough Xinjiang or Southwards over the Karakorum Highway to Pakistan. For the first option you can be sure to have constant police surveillance, guarding you from seeing the labor camps meant to ‘reeducate’ the Uyghurs, a muslim minority in China.

Hotels will often not allow foreigners and from what we’ve seen from others everything seems complicated. Pakistan was very high on our wishlist. This option was however also off the table. The Karakorum had long been closed this time of the year. Too much snow and subzero temperatures.

Sabina was drawn to India and convinced Robin with the prospect of a culinary Indian feast. Something he could really use, after losing his fair share of pounds on the Pamir. The e-visa was relatively cheap and the flight was too. We could fly direct from Almaty, so less handling meaning less risk of breaking or losing the bicycles on the flight. It also borders Nepal, a country where we also have a mission to accomplish (but we’ll tell you about that later).

Full of excitement we hoisted the two boxes containing our bicycles on top of a small taxi minivan. We had just touched down in Delhi and besides from it being a lot warmer and busier, the culture shock we had been warned for didn’t hit us just yet. We had booked a hostel in Hauz Khas Village. A hip urban neighborhood, home to trendy bars, cafes and restaurants. The center bans cars, making it a safe haven in otherwise loud and hectic Delhi.

The real culture shock was reserved for our taste buds. We hadn’t eaten anything remotely spicy in over five months and our mouths were not ready for the spicy Indian cuisine. Without question, this was something we had to get used to quickly, because even when it hurt, the taste was miraculous. Our friend Josh, whom we had met first on the cargo ship to Kazakhstan joined us for dinner and introduced us to the glorious tali’s and other Indian dishes.

We spend a few days immersing ourselves in the intense city. We pushed our way trough the crowd at the bazar in Old Delhi, coughing at the spice market. We got countless of selfie requests at the Red Fort and payed fifteen times the price locals pay to get in. Sabina got surrounded by a horde of men wanting to take her picture at the Big mosque, when Robin left her for a second to take some photo’s. We rode around the city on the metro, shopped till we dropped. But mostly we ate and we ate, and then we ate some more.

Ross and Paxton had also reached out to us, as they were in Delhi too. They had been cycling the world for over two years and had just returned from a family visit in their hometown in the States. We agreed to meet and talked about our plans in India.

Actually, we mostly talked about the lacking of our plan. Our initial idea was to leave the bikes for a while and travel India by train. But we hadn’t cycled for a few weeks and we were itching to start again. Ross and Paxton were planning to cycle to Nepal and from there on to Darjeeling and then Myanmar. We too wanted to cycle to Nepal, since a blog from Gone Bikepacking about cycling the Annapurna region had sparked our interest. We also wanted to hike the Manaslu Circuit and we realized we had to get there in time because winter was coming rapidly.

India had to wait. We enjoyed hanging out with Ross and Pax and spent a few days with them at the loveliest and most interesting Warmshowers host Shivani. She was so kind to open up her beautiful apartment which also happened to be in Hauz Khas Village. We guessed it would take us about one or two weeks to get from Delhi to Pokhara, the base for all Himalayan adventures.

There is no country but India, where Robin's former occupation would be thought of as being funny. But try telling you're an air quality engineer in Delhi and you will definitely get some giggles. Delhi is one of the most polluted cities in the world. We were here right after Diwali, a festival with a lot of fireworks. This time of year farmers also burn their crops. Increasing the levels of fine dust and smog even more.

According to aqicn.org, a real-time air quality index, fine dust (PM10) was at 999 micrograms/m3. We believe the values might have even been higher since there was only room for three digits on the website. For comparison, the value limit in the European Union is 40 micrograms/m3 and the safety limit according to the World Health Organization is 20 micrograms/m3.

The government was taking some precautions. One of them was the Odd-Even scheme. Under this, vehicles starting with odd number license plates will not be allowed one day and even numbers will not be allowed on the road the next. This meant that there was only (supposed to be) half the traffic on the busy roads. It gave us extra courage that cycling out of Delhi wasn’t a complete mental suicide mission.

Navigating the city’s winding roads was a challenge and Komoot wasn’t on our side, sending us over stairs and briefly onto the highway of which we were immediately send away. Here-fore we had to cross about eight lanes of speeding traffic with four loaded touring bikes and a raised road divider, but at least the traffic officer lead us trough the first half. After these mishaps Paxton decisively took the lead in navigating. She is the cartographer after all.

Through Uttar Pradesh and Uttarakhand

Immediately on the first day Paxton’s bike was starting to show massive failures. At one point the entire pedal even fell off. A quick fix with a steel pin and a bolt got us to our first overnight, where she miraculously enough found a decent new crank.

After approximately 350 kilometers in four days, of which two we were joined by colorful French-Dutch cyclist Kevin we reached border town Banbassa. We had crossed two states, Uttar Pradesh and Uttarakhand. Along the way we feasted on Indian treats as Jalebi’s, lassi’s, sugar cane juice, but also savory snacks such as pani puri and samosa’s, always accompanied by a nice masala chai.

When we first crossed the Ganges, out of nowhere came this big guy on a bicycle beautifully decorated with hand painted flowers, named Kevin. He too was cycling from Delhi to Nepal, on his way to a Vipassana course. He had been in India for a while now and had mastered the Indian head wobble completely. It had confused us many times before, even when we knew shaking your head directing the ear from one shoulder to another means yes. It looks like a cross between a nod and shake, but does it mean ‘yes’? Or, does it mean ‘no’? Or, even ‘maybe’?

Camping in the living

On the same day as we met Kevin we had already cycled a hundred kilometers when we wanted to find a hotel before dark. The only place we could find, was a five star resort and it was way out of our budget. Setting up camp in this crowded area was impossible. There was no way four people could go by unnoticed and we definitely didn’t want to sleep with a big group of Indians staring at us.

A man in a car pulled over, and he instructed us to cycle into his city. After going in the wrong direction he told us to follow him and stay at his house for the night. It took quite a while to finally reach it. Which was a bit scary since it was dark by now, but extremely busy and we were quite exhausted.

But we were happy we had found a place to sleep, especially given the fact he was taking in five people and their five bicycles! It wasn’t a very big house, but we could sleep on the couch and on our sleeping mats on the floor, covering the entire living room. His mother made us kebabs and dahl (lentils) and the next day we fought our way out trough the busy streets of this small congested city.

The roads in India were surprisingly good. Yes it was busy and very loud. And yes we saw some bus, car and motor wrecks from what seem to had been terrible crashes. But as long as you follow the rule that busses and trucks alway have the right of way and they don’t need to look in their mirror, you are fine. Big beats small.

It isn’t the most interesting scenery however. The fields and shops are the only roadshow you get in this part of India. There are enough interesting figures on these roads and in these shops that cause for some amusement. Our favorite was a monkey stealing a bag of potato chips from a small shop, as we cycled by, and the angry shopkeepers face. Just priceless.

Otherwise the whole border process went quite smooth. We were happy to enter a new country, hopefully one that was a little less loud.

Good reading. I think cycling in India is intense for a group + likely tends to be overwhelming for singles. Enjoy!!

Amazing pictures and great stories! It’s so much fun to follow you two :-).

Hi there! Read your article! Glad you enjoyed your time in India… Just to let you know, North-East part of India is far more beautiful than other part of India, next time you plan for traveling in India, don’t forget about it.

Matthewreply
– In reply to: Mrinal

An interesting blog! I wish that such blogs, especially by foreigners, will help promote cycling in India.

In India I was often surrounded by people wanting to take photos or get my autograph just like a movie star. Very tiring after a while but being home three days made me miss it.