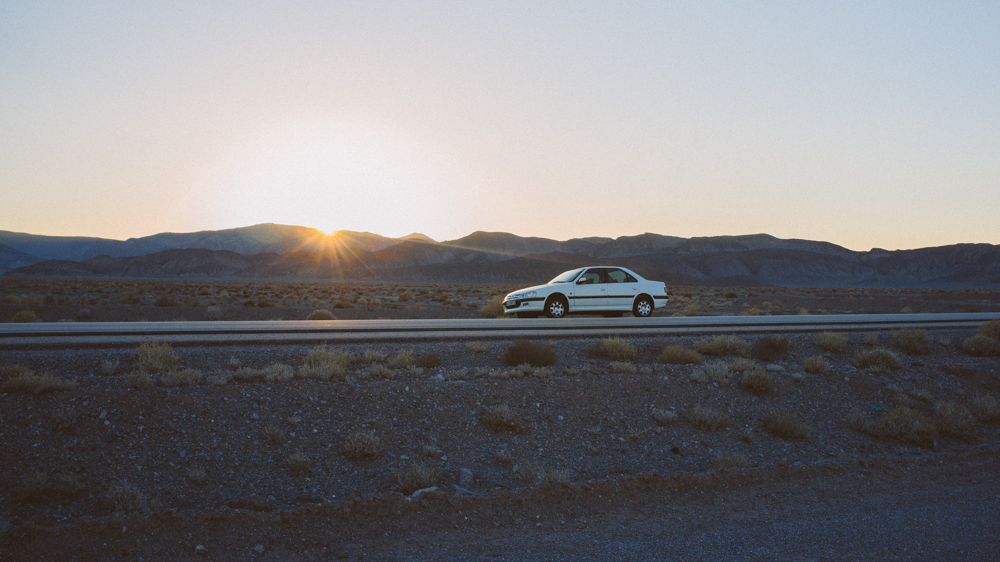 After sightseeing in Tehran we hit the road. First on our route is Esfahan.

We decided to rent our own car, to drive all the way to the South of Iran. We’ve read that the roads are fine, plus it spares us a lot of time in the short two weeks that we have. No waiting for busses, figuring out how to get to the busstop, buying tickets and we can drive and stop for pictures whenever we want.

We pay about 19 euro’s per day, and 110 euro’s extra, for returning the car in Bandar Abbas. Our badass Peugeot Pars, maybe isn’t the Paykan Robin dreamed of, but it sure is an authentic Iranian (brand new) car.

Traffic in Tehran is pretty hectic, and the roundabouts require utmost concentration. Motors and other cars pop up out of nowhere, and lanes don’t exist. You don’t get the right of way, you simply demand it. It’s almost as a miracle how this functions without people crashing into each other every other second.

On our first stop, one and a half our in, Sabina suddenly realises she left her coat in the hostel in Tehran. Inside the jacket? Wallet, including debet and creditcard. We still have three more hours of driving to do, so returning is no option. With no working sim card, we can’t reach the hostel. We find wifi and send them a message on Instagram and Facebook if they can keep it safe for us. Thankfully, the cards are useless in Iran.

In the North of Iran we come across some toll roads. The operator doesn’t realise we are tourists at first, but when he looks down at us a big smile appears on his face. Mister, where are you from. No money! Sabina however doesn’t always get the same VIP treatment with her darker appearance. So yes, it’s true, especially in Iran. Blondes do have more fun.

Visiting Iran in December means short days. Sunset is around five, and it gets dark really fast after that. This however treats us at the most wonderful views of the cascading sun and the beautiful colours it casts on the mountains. It also means driving in the dark a lot. We were hoping for star filled skies, but the nearly full moon is too bright. The moon does make it easier to drive in the dark, which we end up doing multiple times on behalf of late departure.

On our last sanitary stop, just before we drive into the city Isfahan, the one thing we were needing most (a lovely and always so clean squat toilet) is nowhere to be found. Behind an old building it is then. Sabina walks a bit further, so she doesn’t scare of the local truck drivers with her own private full moon.

Pants on her knees, she hears dogs barking. And it’s coming closer. It’s coming closer fast. She sprints, heart is racing, and she barely makes it to the car before the huge pack of wild dogs devour her. Only to see, whilst safe and well in the car, that the two dogs are actually still about 5 meters away. Still counts as a near death experience in Sabina’s opinion.

Construction starts early in Isfahan. We are woken up by the sound of a grinding machine. The brand new Mahbibi hostel we are staying is good, but not very pecial. However, their tour guide Armin definitely makes up for our rough awakening.

Today we tag along with Armin and his intern (a.k.a. his daughter). He shows us the shops, where the souvenirs still are handmade. Copper vasues with handglued rocks, tiles with the typical blue color (we even have a go at it ourselves!) and copper and brass plates with beautiful patterns precisely hammered into them. Imagine hammering away for over 45 years, the ticking sound all day. We would go mad within a week.

The highlight of the day is a visit to the big mosque of the shah at Naqsh-e Jahan Square. We bribe the securityguard and he secretly hands us the key to one of the minarets. We don’t want to get caught so we sneak up and we crawl over the ground, where we can be seen from outside of the mosque. The narrow spiral staircase of the 48 meter high minaret is pitchblack, but small air windows give us a sneak peak on the extraordinary view we are about to get.

After such adventure we cool down with traditional saffron icecream on the square.  Our guide’s favourite, the vendor has even memorised his security code for his debetcard. You know how they tell you to never share your code with anyone and keep it secret at all times? Not in Iran!

We had already been surprised with the question what our code was, but apparently this is completely normal. Why even bother having a code? No idea, Iran is weird sometimes.

Later we enjoy more Persian cuisine. Well, Robin does. As a vegetarian healthfreak, life in Iran isn’t always easy. Meals are mainly about lamb or a different form of meat and white rice. Today we get Beryani, a traditional food in Isfahan and Dizi, Iran’s national dish.

After we stack up on some saffron (2 grams for €10, a bargain for us!), we head to the Armenian quarter to visit the Cathedral and take a selfie with Santa.

When evening falls in Isfahan, we strongly reccomend you find one of the historical bridges, crossing the now dry Zayanderud (life giver) river. The bridges serve as a place for public gatherings, where men and boys sing together. Here we also spot our very first Western tourist!