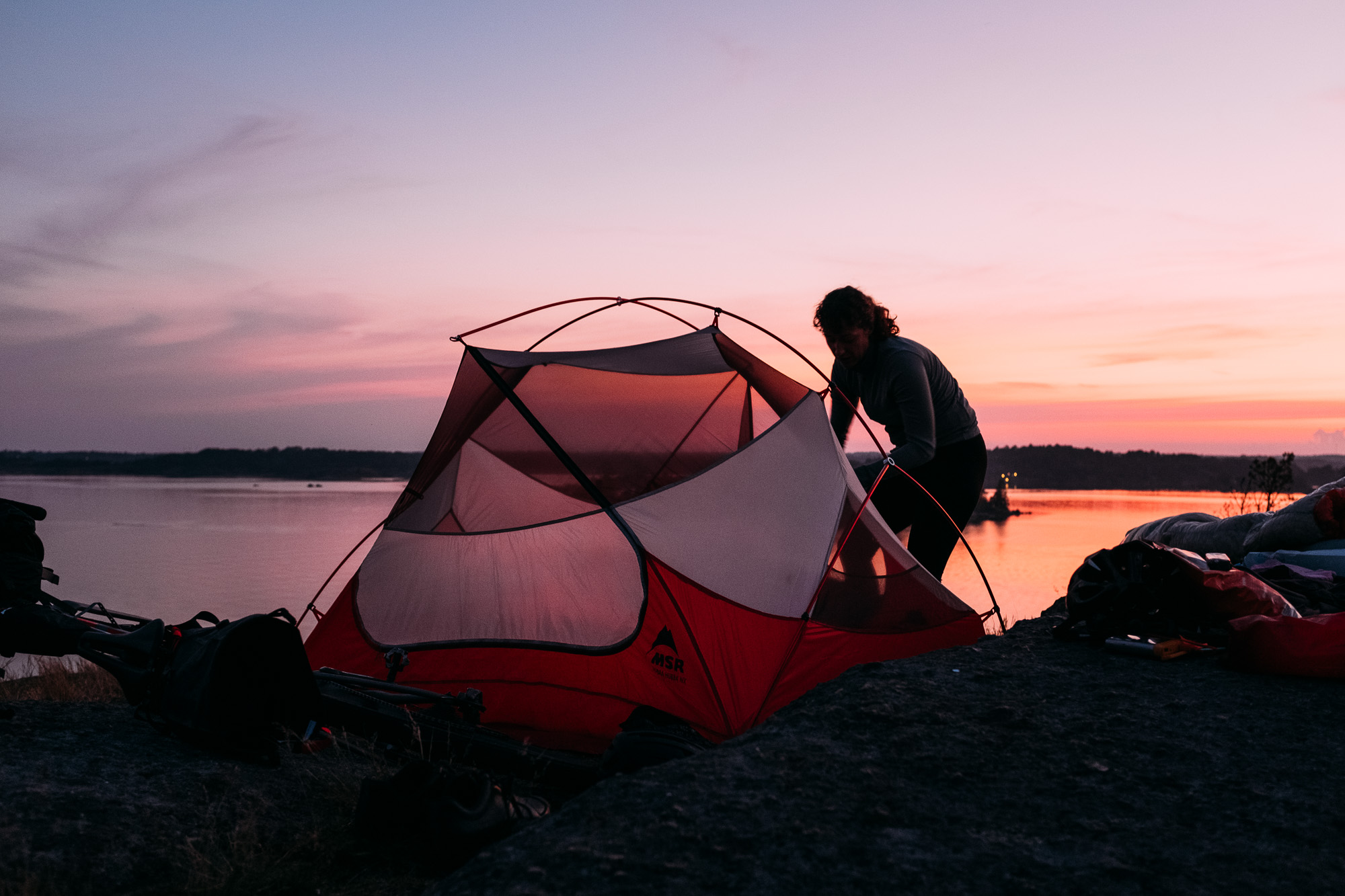 In 2020, we made our first attempt at bikepacking the Blekingeleden. With our bikepacking bags strapped to our trusty steel touring bikes we set off. Deep in the beech forest, we climbed the Ryssberg and were rewarded with fantastic views of lakes. But we weren’t ready for the trails covered in tree roots. Now, a year later, we felt much better prepared.

This time we competed on a serious gravel bike and a hardtail mountain bike. And indeed, we were a lot faster despite the heavy rain on the first day. From the green-fringed lakes in the forest, we rode to the beautiful coastline where we were treated to the most beautiful sunset we had ever seen. This year however, we only had three days. Far too short for the whole route, at least for us. Therefore, the route was shortened for the second time, and we have no choice but to try again next year.

The Blekingeleden is a hiking trail in southern Sweden. The route starts in the medieval town of Sölvesborg and takes you via trails and gravel roads through forests, across meadows and along lakes and streams to Bröms on the east coast. But to be honest – we have never made it that far.

Bikepacking the Blekingeleden – day 1: From Sölvesborg to Halen

We set off in Sölvesborg, which we reached by train from Malmö. Immediately, the route took us deep into the beech forest where we began the climb up Ryssberg. Where at the top, we were rewarded with a fantastic view. The gpx file that we loaded on our cycling computers differed from the original route, so we cycled a bit more on gravel roads. This was actually a welcome change from the difficult single tracks, although we did get rained on more here than in the forest. The gravel roads were completely empty, and it felt like we had Blekinge all to ourselves.

Back in the forest, we enjoyed the smell of the deciduous forest with beech, oak and hornbeam. We cycled past lakes and meadows that we recognized from last year. The colours in the fields were quite this time around, even though we were there at about the same time. The deciduous forest that is interrupted occasionally by dark elements of planted spruce was still the same. After only a few hours cycling, we reached the point where we arrived exhausted last year after a day’s slog: Östafors. Now we filled our water bottles here and rode on proud of our own progress.

From the foot of Sibbarpsdalen in Östafors, the Blekingeleden follows the same tracks as the Skåneleden, all the way to Olofström in the heart of Sweden’s southernmost wilderness. From the valley, we had to push the bikes for quite some time on densely grown footpaths that sometimes seemed to go straight up. However, the biggest challenge of the day was yet to come. The ‘spången’ are wooden planks to walk on that are even more challenging in wet conditions. The slippery planks are just wide enough for hiking boots, which means you have to carry your bike for quite some time – while performing a balancing act.

Halen, the beautiful lake and nature reserve near Olofström was our final destination for the day. Here are several wind shelters right on the shore and we found a beautiful Vindskydd that we shared with two canoeists.

Bikepacking the Blekingeleden – day 2: From Sölvesborg to Halen

After a long and deep sleep in the open air, we woke up by the beautiful lake. Our cycling clothes and shoes were still wet from yesterday’s rain, but fortunately we had both packed an extra pair of dry cycling trousers. Our goal was to be completely self-sufficient during this trip. That meant a lot of freeze-dried meals and filtering water. The water from the lake tasted fine, running water in Swedish nature is generally drinkable anywhere.

From the shelter, we cycled along a gravel road around the lake towards Olofström. From there, the route took us a little way along the road to the Kullans nature reserve. Here, the Blekingeleden follows a footpath that is not suitable for cycling. Hike-a-bikes are part of the fun for us, but when the narrow path goes right through the brambles, we start to squeal too.

In some places, the path ran right along a high ledge, which prevented us from trying to ride the technical trails. A minor glimpse here can lead to disaster. Yes, the nature is beautiful here, but the gravel roads that go around this area are also very nice. We will leave this part out next time.

Camping by the archipelago

We had set our sights on spending the night at our favourite camping spot of last year. But if we were to wander through the bushes all day, that was never going to happen. After an insanely dangerous crossing of a motorway (you literally climb over the crash barrier to get to the path straight up the hill on the other side) we decided to alter the route. Our decision was only reinforced when we saw a mountain hop up the mountain with his ultralight bicycle. Time for plan B.

The only problem with that? We had not made a plan B before leaving. We found a shady spot next to a country road and figured out a route to Järnavik in the komoot app. We configured the route on small roads as much as possible, hoping to avoid other traffic. In reality, however, many of these roads turned out to be overgrown and impassable even for hike-a-bikes.

The campsite shop in Järnavik beckoned, as we went through our snacks more quickly than we had anticipated. After 60 kilometres of adventure and route exploring, we decided to follow the easy main road. Blekinge is fortunately a lot quieter than Skåne, so we were not bothered too much by cars (or they by us). Where Sabina had the advantage on the singletrails with her mountain bike with 2.25 inch tyres and front suspension, here on the road she had to struggle to keep up with Robin with his aero gravel bike.

With a strong headwind, as befits the coast, we entered Järnavik. At the windshelter, we found two Belgian touring cyclists who immediately recognized us. Our blog from last year had inspired them to cycle here. We shared cycling stories and enjoyed the beautiful sunset over the archipelago from the fjord. The viewpoint was so beautiful that we decided to sleep here under the stars.

On the last day, we switched from adventure to holiday mood. The Blekingeleden goes inland from Järnavik and we wanted to get on the train home in Karlskrona. So, we decided to follow the road along the Blekinge skärgård (the archipelago).

We drove past small villages with huge villas, but also cute traditional Swedish wooden houses in brilliant pastel pink, blue and even green. We picked wild strawberries and raspberries along the way and bought some delicious honey at a roadside stand. Souvenirs are always bought on the last day of a cycle tour! To our great surprise, we ended up on the Blekingeleden again, although this time it went over wide gravel roads through open fields instead of straight over a mountain through the bramble bushes.  A long and boring stretch for walking, but great for cycling.

We were amazed by all the highlights along the way. We drove past a petrol station which was more like a museum  and laughed at the sight of a canary yellow Lamborghini driving extremely slowly over the bad gravel road. At Edestad, we accidentally ended up on the wrong side of the train tracks, but judging by the broken-in tracks, we were not the first ones to climb over them. Railways, motorways, in Blekinge these are not insurmountable obstacles.

Biking turning into boating in Blekinge

The last part before Nättraby, we couldn’t avoid the main road, but luckily there was a cycle path along it. The Blekinge coast is bursting with luxurious holiday villas with private beaches and massive gardens. We drove between all this splendour to Sjuhalla, where we got on the ferry to Karlskrona.

On the dock you have to put the signal up yourself, so that the skipper knows that a passenger wants to go on the ferry. The boat first went in the opposite direction, but we felt like taking a tour of the beautiful archipelago, so we hopped on anyway. On board, we bought coffee and Robin practised his Swedish with a very enthusiastic elderly couple. The man told us that Karslkrona was founded during the reign of Charles XI in 1680. It was established as a southern naval base, for when the northern harbours froze in the winter. The name of the town literally means Karl’s crown, or the king’s crown.

The last stop in Karlskrona

With all this new knowledge, we got off at Fisktorget, the end station of the ferry, in the city on the peninsula. We had just enough time to get a typical Swedish ‘korv med mos’ (sausage with mashed potatoes) for the journey back to Malmö. Three hours later we were back in the centre of our home town of Malmö. A perfect weekend adventure richer.

Disclaimer: the Blekingleden is not a cycling route. But that does not mean that you cannot cycle. Sweden has the ‘Allemansrätten’, a law that makes sure you can walk and cycle on any land (except private gardens, in the immediate vicinity of houses and on farmland and some national parks)! As long as you don’t disturb anyone and don’t leave any tracks, you can cycle almost everywhere in Sweden. However, this is a set out as a hiking route, so please don’t set out with a group of 20 riders and always give way to hikers.