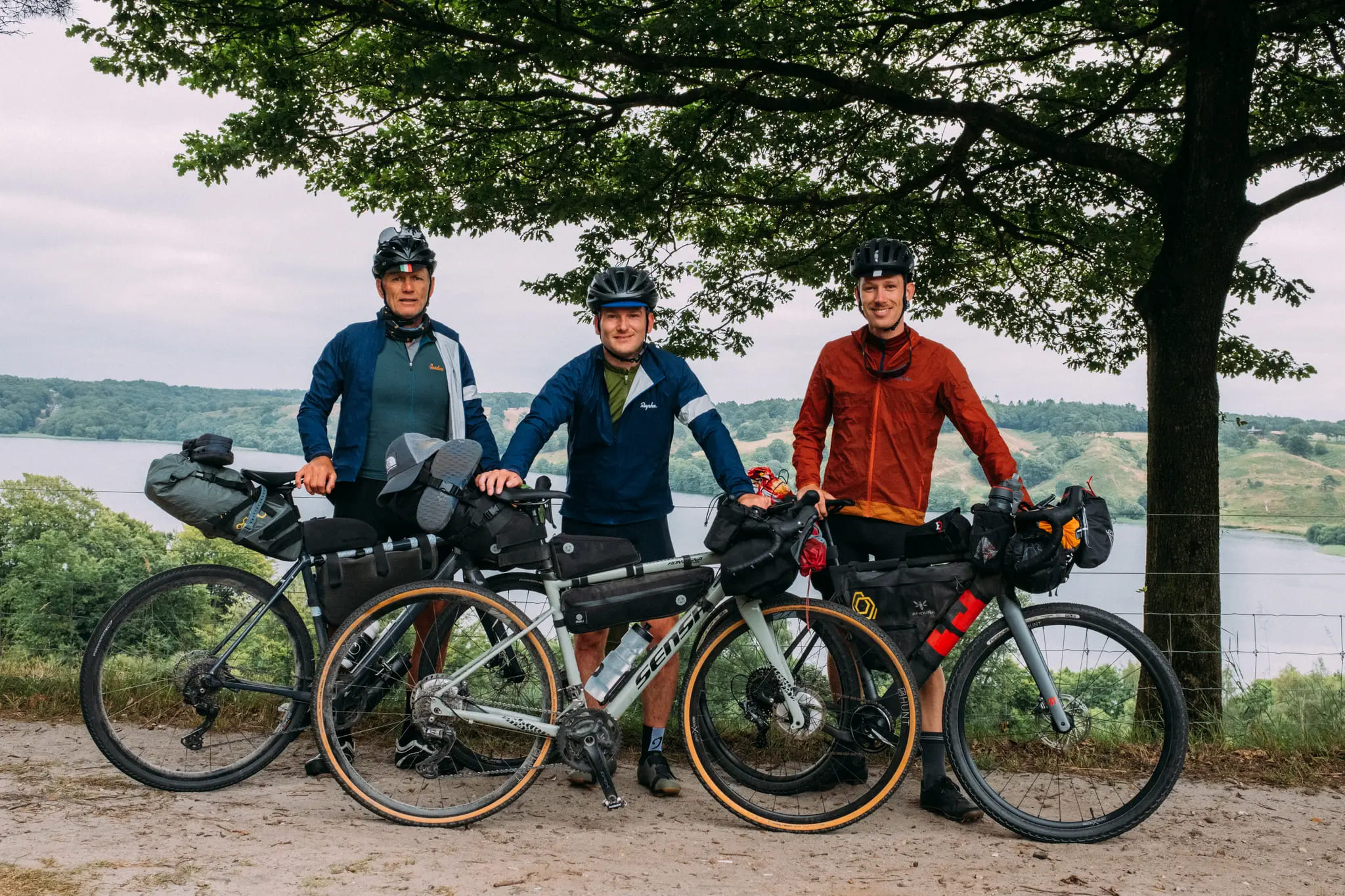 Travel and bikepacking was near to impossible for a long time. Even family visits between the Netherlands and Sweden were a hassle for months. So when the travel restrictions finally allowed it, Robin, his father and brother travelled to start of the Hærvejen in Denmark. Here they would finally meet again after a long time. And what better way to enjoy each other’s company than a 400 km bikepacking adventure?

The Hærvejen – translated as the army road – is a prehistoric route between Frederikshavn in the north of Denmark and Padborg, located near the German border. The route, which is more than a thousand years old, has been an important trade route throughout the years. Oxen, honey, fur and weapons were transported over this road. Today, the Hærvejen serves as a cycling and walking route. On the way, we saw medieval churches, Viking stones and prehistoric burial mounds.

We drove the route from north to south. There is plenty of wind in Denmark, as evidenced by the many windmills along the route, and we had the wind in our backs. For logistical reasons, our adventure did not start in Frederikshavn, but in Aalborg. It is easy to get there by train. The majority of the route is paved, but along the way there are also some singletrails and gravel roads through forests and fields.

I travelled by train from Malmö, Sweden – where I live – via the Danish capital, Copenhagen, to Aalborg. The country’s fourth-largest city is easily reached by train from every corner of Denmark. Martin (father) and Jeroen (brother) had driven from the Netherlands to Padborg by car. The last part of the journey was also done by train.

The official starting and finishing point of the Hærvejen is about 65 kilometres to the north, in Frederikshavn to be precise. A heavy storm nearly blew us off our bikes at times, so we were glad we had skipped the section between Frederikshavn and Aalborg. The first few kilometres were on lovely cycle paths through almost endless wheat fields with dark rain clouds in the background. At the height of a tiny village called Kaas, the route curved a little. Not only did this mean that the wind direction was now more in our favour, but we also finally got some gravel under our wheels. Even some sections of hike-a-bike.

The last part along the Slettestrand was beautiful. From the high sand dunes, we had an amazing view of the beach. We climbed the bunkers from the Second World War and had to hold on tight. It is always windy here, except when there is a storm! We slept at Svinkløv campsite, fantastically located and with all mod cons. There was even a kitchen for us to use.

On the second day of our adventure, we really picked up the original route. It was not long before the signs with “Hærvejen” showed us the way. The whole route is well signposted. The first part of the route took us over rocky gravel roads through wooded areas, interspersed with heathland.

After a little over 20 kilometres, we crossed the Aggersund via a bridge. If you are lucky and pay close attention, you can see seals bobbing up and down in the Limfjord from the bridge. The route then passed through Løgstør, a good place to stock up on snacks in one of the many supermarkets. Cola, ice coffee and energy drinks. Anyone desperate for sugar has come to the right place.

We cycled most of the way along the beautiful gravel roads of the Hærvejen. The long roads took us through a patchwork of landscapes. One moment we enjoyed wide views and the next we were cycling through the forest.

Along the way, we didn’t find many places to stock up on food and snacks. On the other hand, there were plenty of water taps. In Aars – about 50 km away – we had coffee and cake at the local bakery. Near Skals we deviated a little from the route to get our groceries. On komoot, we had seen that there were a number of wind shelters before Viborg. These typical wooden huts can be found all over Scandinavia. You can sleep here for free and most huts have a water pump and a fire place.

The third day took us through the heart of Mid Jutland, or Mittjylland as the Danes say. After heaps of porridge, we rolled up our sleeping bags and mats and prepared for departure. The first part of the route went right through Viborg and was perhaps not the most beautiful part. But what followed later that day made up for everything.

The great thing about bikepacking is that you see the landscape change with every kilometre. The vast agricultural lands slowly make way for dense forests. In many places, the nature even reminded me of Sweden. Another big difference with the previous days was the many hills. The route this day included a number of short but vicious climbs.

The 100 kilometres of the day before – together with the altitude metres of today – were quite challenging for Jeroen. But with some sugar and energy in the form of a can of coke, a toasted sandwich and an ice cream, Jeroen was back on track. Which was good, because one of the nicer parts of the route was still to come. The stretch along the Hald Sø (the Hald Lake) is truly beautiful.

Over hilly terrain and a challenging mix of unpaved roads, the final destination came in sight. In Jelling, two rune stones were found. According to legend, it was here that Viking king Harold Blauwtand officially switched to Christianity. Next to the UNESCO World Heritage site, we found a B&B. A night in a real bed, a hot shower and a takeaway pizza.

On day four we had another long day in the saddle with almost 100 kilometres. The night in the B&B had done us all good, my activity tracker showed that I had slept almost 11 hours. Martin and Jeroen had also slept well. So the 100 kilometres that were on the programme today promised to be no problem at all.

Just before departure, we picked our clean laundry off the line and stuffed it into our dusty bikepacking bags. A double breakfast and now we were really ready to go. Just outside Jelling, we rode straight through the fields with an immense amount of corn and grain.

A few kilometres before Bække, we came across a special attraction: Klebæk Høje. This historical site consists of two domed burial mounds from the Bronze Age, a 45 metre shipwreck and a runestone from the Viking Age. Here, we met a Dutch couple who were cycling the route the other way round. Good luck with the headwind the next few days, I thought to myself.

After Vejen we left the Danish hills behind us and the road surface levelled out. The remainder of the route was made up of several kilometres of gravel. We bought food, snacks and drinks in Vojens before we cycled a little way back north. We had heard that there was a windshelter in a beautiful spot, in the middle of the forest. Which was right! After a barbecue, we rolled into our sleeping bags, tired but satisfied.

The last day of our Hærvejen adventure was a relaxed ride. The final destination, Padborg, was only 65 kilometres away. Packing the bags went faster and faster. The yesterday’s washed clothes no longer smelt of bright detergent, but of the smell of fire.

It was not only our bodies that had to endure a lot during the trip, but also the material. The bikes were so dusty that it almost looked as if the frames were a different colour. The first part of the route was mainly on tarmac roads, but the devil was in the tail. Maintenance had recently been carried out on a number of gravel roads. And by maintenance I mean dumping a new load of rocks. With 38 mm tyres, it was quite a bumpy ride at times.

Just when we had had enough, a tall tower loomed up with a big yellow ‘M’. A few hamburgers and cups of coffee and the last part of the route could be completed.

The finish of our adventure was in Padborg, a small town that mainly serves as a transit destination. We stayed in a hotel and rested a bit before going our separate ways. My brother and father loaded their bikes on the back of the car and drove back to the Netherlands. I took the Flixbus back to Copenhagen and eventually the train to Malmö. What a great bikepacking adventure this was. Even more special to do this together with my father and brother after not having seen each other for a long time.

More about bikepacking the Hærvejen

The campfires, nights in sleeping bags and hours in the saddle were the ultimate family reunion. For both my father and brother, it was their very first experience of bikepacking. Even with the inevitable walls that were hit and irritations caused by fatigue, bikepacking the Hærvejen became an unforgettable adventure.

The Hærvejen is also part of the amazing European Trail Divide – a 7600 km bikepacking route across Europe from Finland to Portugal. You can find more information about the route here: komoot.nl/collection/1070173

It really was so much fun to do this with eachother ! I am looking forward to our next advanture

It sure was amazing. On to the next adventure 😀

Robin Patijnreply
– In reply to: Frank