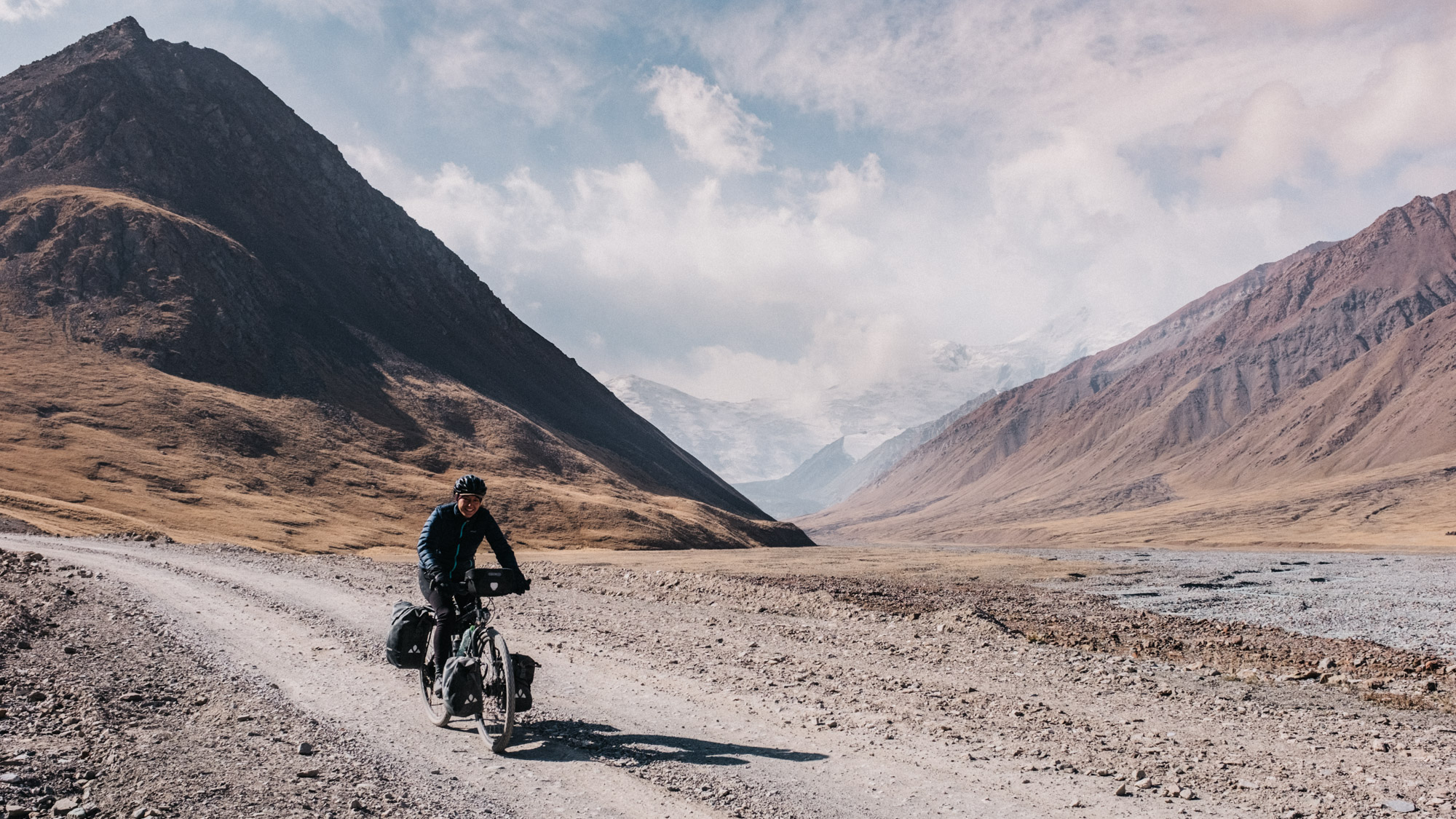 Sometimes you visit a city or a country and you just know you will be back one day. Kyrgyzstan was like that for us. We had seen and heard amazing stories of people bikepacking this rugged country. We had just missed the boat this year. It was October, so too late in the year to ride here.

A lot of passes were already closed, and our gear isn’t really made for winter camping. Nor are we. Also Sabina’s parents were visiting us soon in Almaty, Kazakhstan so we only had two weeks to cross the entire country.

After a few days in Osh we rolled out of the city. On this trip we found that we really enjoy hitchhiking at times. We prefer it over public transport, not over cycling of course. It’s a fun challenge to find a ride and most drivers are extremely friendly and love the company.

With our bicycles it makes more sense to hitch with trucks. There’s enough space for the bikes and for us. The trucks drive for long distances and the cabin is usually very comfortable. Being higher than other cars, you can just stare out the window and get a great view of the country passing by you.

From a small city outside Osh we hitchhiked to Bishkek. It was a bit harder to find a truck, but we ended up getting a lift from a gas truck. The bikes were hauled on the roof, and it worked just fine. By now we had learned picked up on some of the basic questions, so we were able to have somewhat of a conversation with our driver. It usually goes something like this.

Driver: Atkuda? (where are you from?)

Driver: Skol'ko tebe let? (how old are you?)

Us: Twenty-eight and twenty-nine (use fingers to show the numbers).

Driver: Vy zhenaty? While pointing at ring finger (are you married?)

Driver: U vas yest' deti? or just Deti? (Do you have children?)

Us: Net (no). Thinking oh boy here we go again.

Other questions we would get a lot were about money. What we did for a living, how much money we made. What does it cost to live in The Netherlands and what do you pay for rent. At first it felt a bit weird. Why do they want to know what we made? Are they scoping out if they can get something out of us, was in the back of our minds. But it was just pure interest. We have never felt unsafe, and when we offered to give money the driver almost always declined. Usually we offered to pay for food, that seemed to be more acceptable as payment.

If you’re lucky the driver has a good taste in music. This is actually never, so we counted our blessings on our radio-free ride to Bishkek. It was a long drive to Bishkek. Truck drivers are not allowed to drive at night in Kyrgyzstan, so we had to pull over for the night. The driver folded down an extra berth in the back of the cabin. We took the lower bunk and he the top. Who would’ve thought we would spend the night sharing, a cabin with a trucker at a gas station. We loved it even tough it was quite cramped.

The next day our driver even got us breakfast. A box of Chocopie’s, a spongy chocolate biscuit you find all over Asia. Not the healthiest, but hey, it’s the truckers lifestyle we’re livin’ now!

A few hours later we were right in the middle of the city. As we were unloading our stuff, a deranged man was looking at our stuff and shouted a question at us. ‘Are you spies?!’ Oh the lovely encounters we have, they keep amazing us.

We only spend two nights in Bishkek and continued our journey to Almaty. There wasn’t a lot to do or see and we will most likely come back here next time we are in Kyrgyzstan. For now we just had some unhealthy junk food and prepared to cycle on towards country number seven, Kazakhstan.

It was a short ride to the border. The crossing went smooth too. On the bikes we could just jump the queue and pass all the cars waiting in line. Visa was free and on arrival, and of course just as all the other central asian countries, they stamped on the same page creating a neat little collection.

The first hundred kilometers after the border were nice. The road wasn’t too busy and the landscape was made up of wavy hills. The wind was playing it’s ever apparent part and grew stronger in the afternoon. We found a campsite that offered some cover after following a small road to some monument in the middle of nowhere.

The upcoming day, the road became a bit of a bore. It’s a new road and the first part isn’t open-end, that part was fun. We had the fresh concrete all to ourselves and the traffic was still on the old narrow parallel road. Weirdest part about this road, was that there are no turns for a few hundred kilometers. It just goes on and on and on. Soon enough our fun ended and we had to join the busy traffic on the old pothole filled road.

We stopped for lunch at one of the restaurants and ordered some borsh (Russian style soup). Bad borsh as it turned out a few hours later. We discussed if we wanted to continue cycling or hitch another ride for the last part. As if the gods were listening in, just as we were getting ready to leave a couple truck drivers started talking to us and offered us a ride.

We had found ourselves in a truck once again, and this time we didn’t even have to ask. The drivers companion, a small spaniel wasn’t too happy about this at first. After a while we finally gained its trust and he would carefully let us pet him. We had to stop outside the city, since trucks aren’t allowed in the city during the day. At this point the bad borsh also started kicking in for Sabina.

We said our goodbyes to the spaniel and his driver and cycled in to Almaty. A huge city. Not what you need when cramps and nausea have just gotten the better of you. Robin was leading the way in the now dark and busy city. We’ll spare you the details of the shunless toilet breaks, but let’s just say we were happy we had made it to our new home for the next chapter in our journey. It was time to park the bikes for a while and spend quality time with family in this surprisingly beautiful new country.