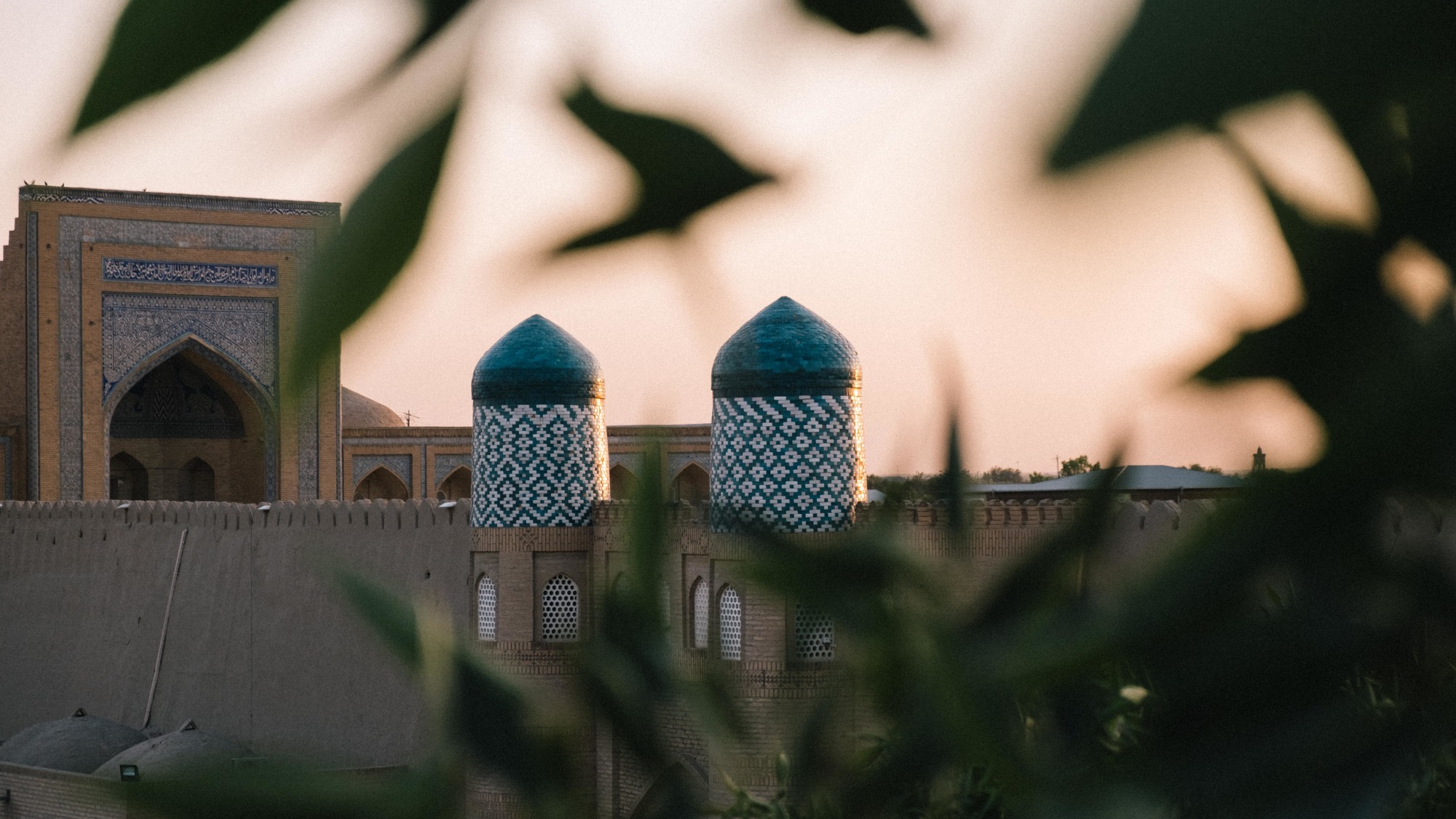 After an insane train ride we finally arrive in Uzbekistan. A country where the ancient Silk Road is more alive than anywhere else. With Khiva, Bukhara and Samarkand as its highlights, we cycle and hitchhike in the steps traders have set for centuries.

It was great to finally get out of the train and start cycling again. We were done with sitting still and waiting, so us and Josh decided to stock up on some groceries and make our way into the desert. Our first desert camp was official, and with the lighting of our BioLite’s and fresh cooked meal it was a true glamping experience.

Friends along the road

From Nukus it was still 175 kilometer to Khiva, the first highlight of Uzbekistan. The road worsened, and the scenery was a bit dull. It mostly consisted of desert, and later cotton fields next to small towns with kids greeting us as we cycled by. Along the route we even ran into some old friends from the Professor Gul on the Caspian Sea.

A pace as high as the currency rate

Josh, who has been cycling the world for over two years, kept our pace high at an average of 19 km/ph. It was nice to cycle with someone else, and especially someone who spoke a few words of Russian. He taught us the word palatka, which means tent in Russian, and gave us many other useful tips.

As inflation has sky-rocketed in Uzbekistan, getting money was somewhat of an issue. No ATM would accept our Mastercard, and the VISA didn’t work. Well, okay. That might have been our own fault. Sabina kind of forgot the pin code. Which left us without money, since we had never gotten around to getting US dollars as a back-up. ATM’s would also be empty a lot of the time, since there are so many bills you need. Luckily we still had Josh as our sugar daddy, so we could at least buy food and drinks to survive.

Cycling with the locals in Khiva

A last stretch of painfully bad road, and we had finally made it to Khiva. An oasis city in the Karakum desert. The old town is surrounded by an enormous wall, which dates back to the late 17th century and is 10 meters high. Within the walls lay more than 50 historic monuments, and a lot of souvenir shops to cater for the shopping needs of the many, many visitors.

We were surprised to see how many locals ride in and around the old town, on their antique bicycles. Most of them you can hear coming from a far, squeaking along the way.

Between Khiva and Bukhara, our second highlight of Uzbekistan, lays a lot of desert. 400 kilometers to be exact. Road quality is poor, and temperatures rise well over 40 °C. Luckily for us many trucks pass these cities. We cycled a little under one hundred kilometers out of the city to the highway, and managed to get a ride in exchange for a meal at a truck stop restaurant. Along the six hour ride, we ran into Devrim. Our Turkish friend who wasn’t bothered by the heat and happily pedaled his way through the desert.

The truck driver dropped us off miles away from the city, so we ended up camping at a gas station. The attendants were happy to let us camp next to the station, they weren’t too happy when we fired up our stove. Frantically they told us to turn it off and use their stove in the kitchen instead. This gas stove was even closer to the fuel pumps, but that’s probably just Central Asian logic. We stopped trying to understand. Whatever floats the boat.

Bukhara is the second Silk Road city, and is much bigger than Khiva. The mosques and the Caravanserais are spread out over a much larger area. With 2,500 years, this is one of the oldest cities in Central Asia. It is also a favorite place for Uzbeks to visit, especially Lyabi Hauz. A square in the centre with a beautiful pond. The fountain in combination with the shade from the trees makes temperature in the surrounding area a few degrees cooler. Men gather on benches, drink tea and enjoy the scenery.

We conquered the high temperatures away from Lyabi Hauz. We wandered through the covered bazaars. Visited the Salon minaret and mosque, gazed through the latticed window onto the central courtyard of the Mir-I-Arab Madrassa. And we drank the best tea in Central Asia at an art gallery.

Bribing our way up

At the Ark we were a bit disappointed. It felt more like we had walked into a poor museum rather than Bukhara’s ancient fortress. The enormous white washed military fortress rises above all else in the city, and we were hoping for a beautiful view over all the grand mosques and minarets. Luckily there is always someone with a key, who in exchange for some som (the local currency) can open some doors. Providing us access to an unrestored part of the Ark. Here we could walk on the 20 meter high external walls, all by ourselves.

A bed and a warm shower

In Bukhara we also stayed at our first Warmshowers, a free worldwide hospitality exchange for touring cyclists. Rakhima opened up her family home to us. Just outside the centre she is opening up her own homestay. Its was a real treat to spend time with her and her adoring parents. Thank you Rakhima, we wish you all the best!

The road between Bukhara and Samarkand isn’t much better, and also across a desert. We enjoyed hitchhiking the previous time, so we decided to give that another go. We cycled out of the city again, and found a ride immediately. This time in an even more comfortable truck than the previous time. The driver was an incredibly nice man, who was happy to share his cabin with us.

We loaded the bikes in the almost empty truck, and hopped in. The road was incredibly bad, and boring to say the least. You definitely don’t visit Uzbekistan for the places ‘in-between’ even though we’re sure you can have a good time there as well. Hanging with locals, ever so curious and hospitable.

Samarkand is the biggest and most modern of the three Silk Road cities in Uzbekistan. A lot of traffic, many restaurants and plenty of supermarkets and shops. But shopping is of course best done at the big bazaar. Here you can buy everything you could possibly need. Fruits, vegetables, souvenirs, the typical Samarkand bread, textiles, cooking supplies, toys, you name it. They had everything. Except for a patch with a flag. Robin has been collecting patches from every country he visits. We found one in Azerbaijan. Already had one of Georgia, but Uzbekistan was proving to be impossible. Online shopping will sort him out some day, to complete the collection.

Taking it slow in Samarkand

Samarkand is very popular amongst tourists, so we decided to skip the crowded Registan and visit the smaller, and maybe even more beautiful Shah-I-Zinda. A sacred place for praying behind the cemetary, which was actually also a special place to see. The narrow walkway filled up quickly, even though there weren’t that many visitors. Taking a picture was all about timing, since you didn’t want any strangers in your shot.

We found that when bicycle touring, being in cities mainly means relaxing and eating out. Therefore we didn’t visit the other main attractions in Samarkand. By now, we also felt like we had seen most of it. We were preparing ourselves to the next country. And a very special one on this trip. From Samarkand we set off towards Tajikistan. To start our Pamir adventure.

We cycled together with Daniel and Thea, a Swedish-Norwegian couple we met in Bukhara. But after only six kilometers out of Samarkand, we were forced to stop. Last nights pizza made Sabina sick. With no hotel, guesthouse or homestay close by, she sleeps all day in the storage room of a telephone store in a small town. Later that day we are able to cycle a bit further to a farm, where we can spend the night in an extra room. The road to Tajikistan was long, but our excitement was big when we finally came closer to the border. We could see the first mountains, and knew it was finally over with the flat lands.

I loved Reading your latest story! Can’t wait for the next one!! Keep on pedaling you two